I've purchased several different scratching posts for our cat in an attempt to get him to stop tearing up our furniture but he never pays any attention to them at all. Not even when I cover them in catnip... He prefers the corners of the couch. Until we purchased this scratching post.... It took him all of 5 minutes to warm up to it and now it's his favorite thing. He loves the little hammock on top and the toy attached to it. And the best part? He uses the scratching posts instead of my couch! Woooo! Very happy with this purchase

S
SierraMyk
Easy to put together - cats love it

Bought this for our two recently adopted cats, one about a year and a half, the other about six months old. They both took to it immediately. The rope pillars seem reasonably sturdy (at least they haven't had the rope off yet). Both of them really like the hammock and take turns sleeping in it. However, the attached toy lasted less than a day before they had broken the string and ripped it off.

Easy to assemble. My cat is too big for the hammock unfortunately— she’s part Main coon. But ahe likes the scratching posts and the little furry ball.But my son loved it— and uses it as a fort Lol 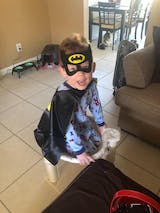 UPDATE: 7/27/19 My cats love this so much that I had to come back and purchase a second one. Don't get me wrong, they like the Trixie brand hammock as well, but I have two soul mate kitties that were squeezing themselves into one hammock together. Now they can still be together, side by side and on the same level. Plus I think they prefer the slightly taller height that the basic model provides. I say this because both windows where these are sitting, get about the same amount of sunlight, yet these two always seemed to prefer to squeeze themselves into the slightly taller hammock. So while all three of my furkids seem to love both brands of hammock, the two love birds seem to prefer the taller basic model so I purchased a second one of that brand and by the looks on their faces, I should have bought a matching set to begin with lol.A few months ago I purchased the Trixie brand of cat hammock that looks very much like this only there is a shaggy fur type material covering the hammock and hammock base, where as this one has just a soft, low pile material. Also the poles that the hammock was attached to were one solid piece each. The poles that make up this Basics brand hammock are 2 shorter pieces each, with a wooden ring that has the same material around it that makes up the hammock. This ring connects the two shorter pieces together, and those connected pieces screw onto the base. The hammock screws onto the top of the poles.The reason I purchased the Basics brand was because the Trixie brand was sold out, however, if comparing the two, I do prefer the Trixie brand because I feel the solid one piece constructed poles on their model would last longer than the Basics model that uses a 3 piece pole construction. Don't get me wrong, it also feels solidly constuctedbonce everything is put together but I feel more parts, means more opportunity for breakage. Obviously, only time will tell though.To sum things up, the Basics brand does seem to be equally as sturdy as the version from Trixie and it looks to be about a half inch to an inch taller than the Trixie brand version, which so far as I can see, makes no difference to my cats. My 3 furbabes seem to be quite satisfied with both of them and considering, I paid the same price for both of then and they both seem like nice cat hammocks, I am satisfied as well. Especially for the price. I will update should one of them break before the other. FYI, the first 3 pics are of the Basics model, while the last pic is of the Trixie version, in case anyone would like to see the real world difference. Anywho, I hope you find this review helpful!

I was hesitant to buy this because some people reported it showing up wayyyy too small, but I decided to take the risk and THANK GOODNESS I did! It took me about 3 minutes to put together and my 2 cats were immediately all over it!! The hammock is super soft, the scratching posts are well made, and they are loving the toy attachment! It’s a good height and the hammock can accommodate them both as they nap together.

12
Back to Cat Hammocks